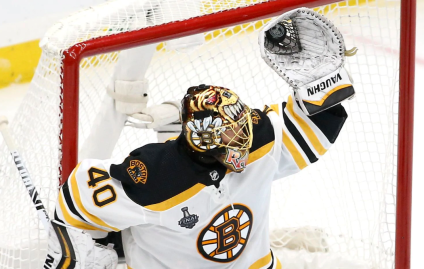 The two sweetest words in sports; Game. Seven. It all comes down to Wednesday night as this series flipped on its head for like the fourth time last night. I know its obvious that when a team wins they normally look different than when they lose, but the Bruins have looked like a completely different team in Games 1, 3, and 6. Last night the B’s were aggressive, but they weren’t chasing hits, they cleared the puck effectively, and they were able to consistently enter the Blues zone with the puck, which is something they’ve struggled with mightily in their losses.

Apparently Patrice Bergeron delivered a Herb Brooks type speech before the game and I NEED to know what he said.

Jake DeBrusk and Charlie McAvoy said that Patrice Bergeron delivered quite the speech in the locker room ahead of this game.

DeBrusk: “It made us all want to run through a wall.”

Bergeron has always been the quiet, classy, lead by example type of guy, but every Bruins fan knows that you don’t become the player Patrice Bergeron is without some fire. Bergeron has been on the Bruins since 2003, he played for a last place team in the disaster that was the 1-year long Dave Lewis era, he won a Stanley Cup in 2011 and he lost a Cup in 2013, so he has seen it all and he realizes this could be the last shot for this group.

Tuukka is on the verge of rewriting his legacy

The presence of mind to make this play is incredible. #NHLBruins #StanleyCup pic.twitter.com/Jqfzm7iQPL

For the past week people have been saying Tuukka needs to steal a game if the Bruins are going to win this series and he was A+ in net last night with 28 saves. Hell the one goal he allowed he technically made the save. So while its hard to say a goalie stole a game in a 5-1 win, Tuukka carried the B’s on his back early last night. If the Bruins win Wednesday night, Tuukka’s legacy is going to shift from a pretty good goalie who couldn’t win the big one to an absolute gamer who shined in the 2019 playoffs to lead the B’s to a Cup when their top 2 forward lines were non-existent.

Marchand and Pasta FINALLY get it going

Heading into Game 6 Marchand (100 pts in the regular season) had 1 goal in the series, which was an empty netter so it doesn’t really count, and Pastrnak (38 goals in the regular season) had ZERO. So for both of those guys to score last night was huuuge because the Bruins have got this far with next to no production from their two best offensive players. Its crazy they’re even alive at this point, which speaks to the excellent depth this team has. So you gotta feel good heading into Game 7 with Marchand, Pasta, and Tuukka all having their best game of the series last night.

Throwing cross check cheapshots in Acciari’s face in the final seconds of the game just trying to incite a riot. I’m all for tough physical play, but these guys are dirtbags. Robert Bortuzzo got tossed with a 10 minute major for that, but that doesn’t carry over obviously so whats he care? And that goddamn wink…

Robert Bortuzzo keeps things classy, as he punches Noel Acciari and gives a wink after. pic.twitter.com/ZaIzHTmSM7

I have to admit I did not know a ton about the Blues heading into this series, but I have very quickly developed a strong hatred of everyone on this team and their coach. I want blood, but I’ll settle for the Stanley Cup. 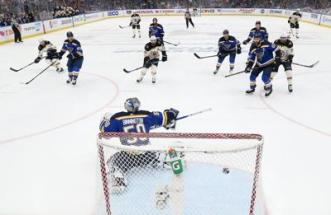 I am a humble man and I will admit when I was wrong. I thought it was crazy to leave David Backes up on level 9 last night for an untested rookie who hasn’t played in a month. Sure Backes is older and slower, but the guy is playing against his former team (who seem to hate him now) in what is likely his last shot at a Cup. I’m pretty sure that guy would die for the Bruins in Game 6. But that doesn’t necessarily means he’d be effective, so Bruce went with Kuhlman and he rewarded the coach with an absolute SNIPE of a goal. Well played.

I love me some Jon Hamm so don’t take this the wrong way, Don. Its one thing to wear wacky scarves, its an entirely different thing to shave your playoff beard before Game 6 of the Stanley Cup Finals. That is an absolute crazy person move. Remember when Tom Brady got a freaking haircut before the 2007 Super Bowl and we all groaned? Yea, you don’t worry about your hair or your beard during a playoff run. Insanity.

Look I get why some of these calls are made. In a vacuum and because of his reputation, this Marchand sweep is almost always going to be a penalty, but why is this any different from the Acciari non-call in Game 5?

How is this any different from the Acciari trip? #NHLBruins #StanleyCup pic.twitter.com/r0GoIjW56S

ARE YOU FUCKING KIDDING ME?? #NHLBruins #StanleyCup pic.twitter.com/Ulqawztok5

This is how these series get out of hand. I guarantee Marchand’s thinking well if they’re not going to call it I might as well do it. Same thing with every Blues player head hunting and boarding every Bruins player any chance they get. Granted they did actually call that dirty and dangerous boarding call early in the first period, but theres so much not getting called its hard as a player to know what the hell is going to be a penalty.

Even though the Bruins mopped the floor with the Blues, the St. Louis fans were still chanting like they’d won the damn game. If you guys want to be Seattle and hang your hat on being “the loudest fans” then you do that. I’m going to worry about adding another championship to my resume.

The #NHLBruins destroy the #Blues by 4 and the Blues fans chant We Want the Cup. #StanleyCup