The NBA Draft Was an A+ Fashion Show Per Usual

As per usual the NBA Draft was the can’t miss fashion show of the year. I mean even Maria Taylor was just straight up flaunting her neon Yeezys right in my face while interviewing each player.

Maria Taylor is most definitely wearing the Frozen Yellow’s. We can’t win, fam.

This has become something I look forward to blogging every year and the boys in this year’s draft did not disappoint. Zion Williamson kicked off the night with his all white everything suit looking like the Kingpin. 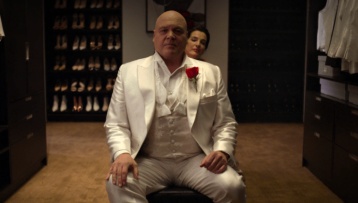 Bol Bol, who I was PINING for the Celtics to draft, had arguably the best outfit of the night with his suit that will undoubtedly turn another NBA athlete into Venom sooner than later.

Ja Morant just looked like a guy straight out of the 90s and more specifically a fit you’d expect to see on the cover of someone’s Death Row Records debut album.

Assuming this isn’t a religious thing because if it is then forget what I’m about to say, but this is just a preposterous outfit for a guy who just became a millionaire. Legit looks like a Matrix set costume.

Darius Garland out here looking like Seraph from the Matrix Reloaded. #NBADraft pic.twitter.com/nLgNaY3pY2

Okay, I spoke too soon because Jaxson Hayes had the outfit of the night with his custom Simpsons jewelry alone pushing him over the top.

While the ESPN analysts were not as kind, with one of them saying he looked like he was wearing drapes, I audibly gasped when I saw Tyler Herro’s suit.

“I got the best drip here.”

It takes some serious BDE to wear this suit. #NBADraft #Heat pic.twitter.com/L5l2sN3xba

A lot of loud outfits on draft night that you really have to be a rapper or an athlete, or at the very least a very wealthy Silicon Valley bro, to pull off.

Rounding things out was Nickeil Alexander-Walker-Texas-Ranger.

Almost have to respect the snakeskin suit with the bolo tie on Nickeil Alexander-Walker. #NBADraft pic.twitter.com/bfHeQVhlmP