Last week, we kicked things off with a look at what is likely to be a committee approach at running back for the Pats this season – a group which, come to find out, might actually have a pretty cool nickname – even with shiny new toy Sony Michel in town.

Now a full week into training camp, most people are focusing on exactly whom is going to replace the production of both Brandin Cooks – who was responsible for 1,082 receiving yards and seven touchdowns last season – and Julian Edelman – who may not have played last year but was expected to be Brady’s main target once again in 2018 and now won’t be available for the team’s first four games.

To be entirely honest, while guys like Jacob Hollister and Phillip Dorsett are getting quite a bit of love from local-area beat guys over the past week, I still feel like it’s just way too early to speculate on anything on that front.

We’ll get there, but this time around let’s focus on who’s going to protect Brady’s ass (literally) this season. I’m talking, of course, about the battle at left tackle.

It all really comes down to two guys: rookie Isaiah Wynn and fourth-year man Trent Brown, the latter I have decided to give the nickname “Juggernaut” (for all my X-Men fans out there).

Seriously, though, LOOK AT THE SIZE OF THIS MAN:

Today in “Trent Brown is large,” here he is next to Sony Michel. pic.twitter.com/e75BGH9D2z

(Also, here’s a picture of Juggernaut for those who aren’t a nerd like me): 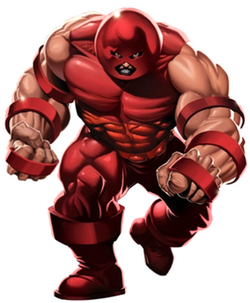 After Nate Solder departed via free agency this offseason, as expected, one of the team’s top offseason priorities was finding someone to protect Brady’s blindside. All in all, Solder was a pretty solid left tackle who, except for an injury-plagued 2015 campaign, kept TB12 pretty clean for the past seven seasons.

Still, he wasn’t worth the nearly $16 million a year the New York Giants decided to give him, and the Pats instead chose to select Wynn out of Georgia with the first of their two first-round selections in the draft this past May. While Michel might be getting most of the attention, Wynn was actually the top BULLdog (GET IT??!!) in the war room that night.

Horrible pun aside, I actually liked the pick. Even though I definitely thought we could have addressed other positions of need first, after doing a bit of research on Wynn it was hard not to get excited.

First and foremost, he’s extremely versatile, as he played both tackle and guard in college – and we all know Belichick loves versatility. Most experts projected Wynn to strictly be a guard at the NFL level due to his “smaller” size (6’2″, 310 pounds), but the guy was a Second Team All-American as a tackle last year and absolutely DOMINATED Alabama in the national championship. Even though his Bulldogs lost the game, Wynn looked flawless and didn’t allow one sack against one of the very best defenses in the country, which featured two 2018 first-round picks as well as another fourth-rounder.

If that didn’t do it for ya, I’mma just leave this right here:

Now back to Brown…

Before even selecting Wynn with the 23rd pick in the draft, Belichick traded the 95th overall pick to San Francisco at the end of April in exchange for the 25-year-old and a fifth-rounder (which ended up becoming Ja’Whaun Bentley, a linebacker out of Purdue).

After being selected by the 49ers in the seventh round of the draft in 2015, Brown didn’t play very much until the end of his rookie season. However, he took over the right tackle spot completely in Year 2, starting all 16 games at the position in 2016 and continuing to do so last season until he was placed on injured reserve with a shoulder issue in December.

As if going from seventh-rounder to starter in less than a year wasn’t impressive enough, how about this quote from Von freakin’ Miller (h/t San Francisco Gate):

That’s some pretty insane praise from a guy who many consider to be one the very best defenders in the league, if not THE best.

Belichick himself wasn’t hesitant to praise Brown this week either, and early reports from camp indicate that after a slow start at OTAs while he was finishing up his injury recovery, Brown’s been working with the first-team offense over Wynn so far in camp.

As of right now, it looks like the big(ger) fella is in the lead. Even though he has been a right tackle throughout his career, it seems like the team is confident that Brown’s beautiful synergy of size, strength, and mobility make him a perfect fit for the left side.

So where does that leave Wynn? If he loses out to Brown for the left tackle spot, is he going to replace Joe Thuney or Shaq Mason at guard – two really good lineman in their own right who were both ranked as top-15 players at their position last season, according to Pro Football Focus? Probably not. He’s also not going to replace David Andrews at center or Marcus Cannon at the other tackle spot.

So then what the hell? Would the Pats really spend such a high pick on a reserve offensive lineman? I certainly hope not, but here are a few different ways I can see this playing out:

Besides that, I really don’t see any other logical explanation for the embarrassment of riches the Pats currently have up front.

Either way, it’s a good “problem” to have, and it’s nice to know our elder statesman at quarterback will have some good protection in front of him once again in 2018.

Be sure to check in with The 300s next week for Part 3 of the series before the Pats kick off the preseason schedule against Washington next Thursday night!