Two straight wins have vaulted the Pats right back up to the top of the AFC East heading into Week 6. Go ahead and smile, Pats Nation. It’s OK. But don’t get too cocky, as the SCORCHING-HOT, undefeated Kansas City Chiefs are coming to town this weekend for a Sunday night showdown.

Just by looking at the numbers, you can see that this one is expected to be a barn burner and an absolute shoot-out. In fact, the current 59.5-point total is slated to be the second-highest over/under for any game within the last 15 years (just behind the 60-point total which closed for a game between the Chiefs and Raiders in 2003). Points are going to be scored in this one. Get ready for some major offensive firepower – on both sides.

The Chiefs currently have the league’s fourth-ranked offense and are averaging 35 points per game, which is the second-highest mark in the league behind the New Orleans Saints. The team is being led by MVP-candidate Patrick Mahomes, a second-year quarterback who was given the keys to the car this year and has rewarded Kansas City for that move with a league-leading 16 total touchdowns so far.

Here’s Mahomes – probably getting ready to embarrass some poor defensive back in front of thousands of people.

It’s worth noting that he’s only got a five-game track record – six, if you want to include the one game he started as a rookie last year – and young signal-callers usually end up defecating all over themselves their first time playing in Foxborough. But this kid has been absolutely electric this year, and while Belichick probably has a few tricks up his sleeve to slow Mahomes down, the Pats defense just doesn’t have the talent needed to shut down a player of his caliber completely.

Mahomes’s historic season has certainly been aided by the plethora of offensive weapons at his disposal. Seriously, this offense is LOADED. Tyreek Hill is one of the league’s most explosive talents at wide receiver. Travis Kelce is the easily best tight end behind Gronk. Former first-rounder Sammy Watkins is a solid, albeit inconsistent, No. 3 option in the passing game. And Kareem Hunt – last season’s league-leading rusher – is off to another great start with 376 yards on the ground so far, good for fourth in the league. (Oddly, though, for a guy who had over 50 catches last year, Hunt is not getting the ball thrown his way anymore and has just five receptions in 2018. Mahomes has pretty much been getting it done with his wide receivers and tight ends all year.)

Fortunately, the Chiefs’ defense is ranked dead-last in the NFL, and they have given up by far the most passing yards in the league. Therefore, Brady & Co. should have no trouble keeping up on the scoreboard. And while our defense doesn’t come without it’s own issues (gee, have I mentioned that before?), I have much more confidence in the Pats’ ability to stem the tide than I do the Chiefs.

Also, after coming out EN FUEGO the first few weeks, Mahomes is actually starting to come back down to earth. Over the past two weeks, he’s only thrown for one score while tossing two picks; the yards have still have still been there, though, and the team hasn’t lost, so he’s still moving the ball. However, maybe he’s not completely impossible to stop after all.

(Can Jason McCourty Solidify His Spot in the Secondary?): After going from exciting new offseason addition to potential final-roster cut candidate and starting the season buried on the depth chart, Jason McCourty has played outstanding the past couple of weeks and seems to be quite rejuvenated. He’s truly been one of the team’s very best defenders and was all over the Colts receivers last Thursday night. Eric Rowe, who started the season as the team’s No. 2 corner, is now probably unlikely to reclaim his starting spot when he returns from injury. That is, of course, unless McCourty gets torched by Mahomes and his minions this week. This is a huge game for Jason McCourty, and I’ll be watching him very closely on Sunday night. 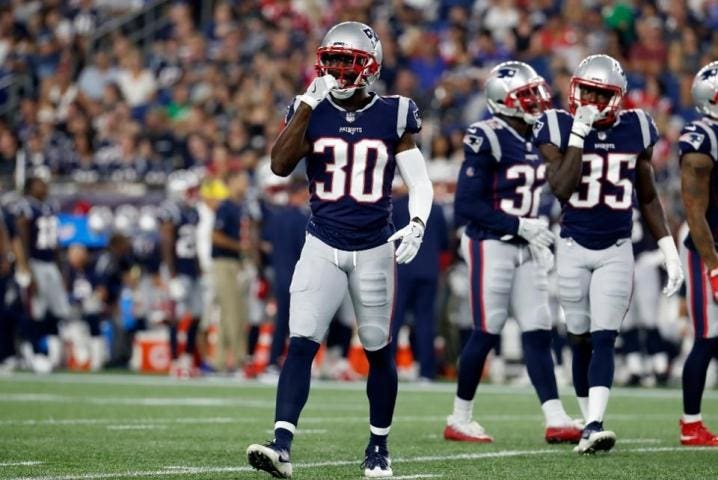 (Will Chris Hogan Finally Wake Up?): There is no doubt that Hogan has been one of the team’s biggest disappointments this season. With Julian Edelman out for the first four weeks of the season and a dearth of other receiving options on the team, many expected Hogan to serve as a bona fide No. 1 wide-out for as long as needed. Except for a lucky two-touchdown game in Week 2 against the Jags, Hogan has yet to surpass 34 yards in a game this season. There’s also two games this year where he’s hauled in just one pass. To be fair, he hasn’t been getting many targets, but that probably has to do with him being unable to get any separation. I believe Hogan is much better served as a No. 2 or 3 option in an offense, and Edelman’s return should actually open more things up for him. But if he can’t get it going against Kansas City’s horrendous pass-coverage, YIKES.

EARTH TO CHRIS HOGAN! Where ya been, bud?

(Two of the Best Minds in the Game Go Head-to-Head): I’m pretty sure by now everyone’s heard of that guy Bill Belichick and how great of a coach he is. And even the most casual of NFL fans should know about Andy Reid, now in his sixth year as head coach of the Chiefs after spending 13 years as the leading man in Philadelphia. Both men have a pretty extensive track record of success, but I’m unsure if people realize just how much of an offensive visionary Reid is. Not only are his offenses always near the top of the league each season, but he was the one who decided to go all in and draft Mahomes last season, even when most others throughout the franchise were fine sticking with Alex Smith. The guy is an offensive visionary, and this will be a fun chess match to watch between two of the game’s best and brightest.

As I said, this one is going to be a whirlwind, with tons of yards and points galore. I do think the Pats will tame Mahomes much more than people expect, but don’t forget about Kareem Hunt and the running game; this is not a one-dimensional offense. This one could be a real boxing match, with both teams trading blows all night long. In the end, I think the Pats benefit from some home cooking and eek out a win, 33-30, with a late Stephen Gostkowski field goal.