Counterpoint: Nick Saban is a Fraud 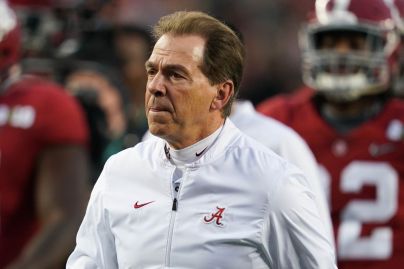 So I am actually going to lay out an argument here, and I implore you to stick with me.

Basically, I don’t think that just because you cannot successfully coach in the NFL, it does not mean you are a bad coach. However, I think if you are a complete and abject fucking failure in the NFL, it may be a red flag and something to keep an eye on. An analogy, for reference, is if you were to look at someone in the corporate world’s resume and after a steady climb they plateaued awhile back. They still achieve highly and work on important stuff in their current role, but never got to the next level. Why?

In the case of Nick Saban, there are no two ways about it, he was terrible as the coach of Miami. Not unlike that catchers mitt Pete Carroll with the Patriots, he could not understand the more subtle nuances of being a coach in the pros and it doomed the Dolphins while he was there. So he took his hair plugs back to the college ranks and Alabama, where he has run train on college football for the past decade or so.

So my argument is invalid right? If he’s had this much success in college he has to be a very high-level coach right? Wrong.

You see, during his time in college, Nick Saban, with his $5,000.00 suits and perfect diction has been an excellent recruiter. He woos people. He’s a good salesman. During his run of convincing half of the 5-star recruits in the country to come play for him at Alabama, he has had a pretty easy go of trampling his opponents in college football that simply fielded an inferior group of players, no offense to them. I mean, it’s basic probability when you break it down. Goliath beats David 9/10 times.

Unfortunately, Saban’s brute force luck has run out and now he has to contend with Dabo Swinney and a just-as-talented Clemson program. And what happens? They get run out of the fucking building. The team that is asked once a season if they could beat the NATIONAL FOOTBALL LEAGUE’S BEST TEAM get’s seven shades of shit beaten out of them. Because as good of a recruiter as Saban is, he has proven to just not be that good of a coach. A poor executor who can’t make in-game adjustments. Because well, if you can adjust in game you don’t generally fail to score in the second half while your opponent drops 13 to go along with the 31 they dropped in the first half. You just don’t.

So there it is. You can trust Nick Saban to sell you a race car, just don’t ask him to race it for you. You can go through him to make it to the pros, just don’t always expect a National Championship. It might not happen. Not anymore.