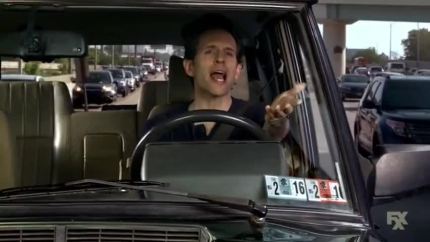 Boston Globe – “Boston must have the worst rush-hour traffic in the country. Now you can back that up with numbers. Gridlock during the peak of the morning and evening commutes was worse in Boston in 2018 than in any other major metropolitan area, even Los Angeles with its infamous traffic, according to a report from Inrix, a transportation data firm that publishes annual rankings of congestion around the world.”

Well I’m glad the tweets that I fire off in a blind rage during my commute aren’t completely falling on deaf ears. I can’t say I’m entirely surprised by this study though.

“Essentially, Inrix measured the time penalty for driving during rush hour, and there Boston topped the list of US cities: Commuters who drove at the worst peak hour conditions would have spent 164 hours in traffic that they would have avoided under regular conditions. On this metric, Los Angeles ranked sixth, behind Washington, D.C., Seattle, Chicago, and New York.”

Well no kidding. I can get to my office on a Saturday morning in like 15 minutes, but 8 am on a Monday? That’s an hour. 5 pm on a Wednesday? 90 minutes maybe.

It also didn’t help that the city of Boston decided it would be a good idea to REMOVE A LANE on Storrow Drive, one of the most congested areas of traffic in the entire city. Ya know it’s only where 93 flows into North Station, the Museum of Science, and Cambridgeside Galleria, which is the only mall in the area.

If you look at some of my tweets from my time spent sitting in traffic over the years, you can actually see my will to  remain gainfully employed slowly deteriorating.

As long as they stop cutting entires lanes of traffic from major throughways then sure. https://t.co/WA1Y35fXGX

Dude on a motorcycle gave me the “look at me” gesture in traffic this AM. I think at that point I’m legally within my rights to run him into the Charles right? pic.twitter.com/xIA0I9wvGe

On top of road work traffic, condo construction traffic, and rainy Monday morning traffic, I now have to contend with @markwahlberg shooting a movie a block from my apartment traffic. pic.twitter.com/X4HGkZSvEE

The traffic in #Boston is truly outrageous these days. I am real close to packing up, heading north and starting “The 300s Upstate Vermont.” #StorrowDrive #Allston #Brighton pic.twitter.com/Ukn5J77HIZ

Legit just saw a kid bumper surfing through traffic in #Boston on his skateboard like Marty fucking McFly. pic.twitter.com/6GSEjmHyF4

Yes, traffic is a fucking disaster because this city was built 400 years ago. https://t.co/OvZXQKOPca

Because traffic in this city is not a big enough disaster, lets be the guinea pigs for the robot cars. https://t.co/VzLqB8hgcY

Me: It’s just a little traffic, relax.
Also Me: Have an episode. pic.twitter.com/fQ8ji3yCEv