I’ve Had it Up to Here with Kyrie 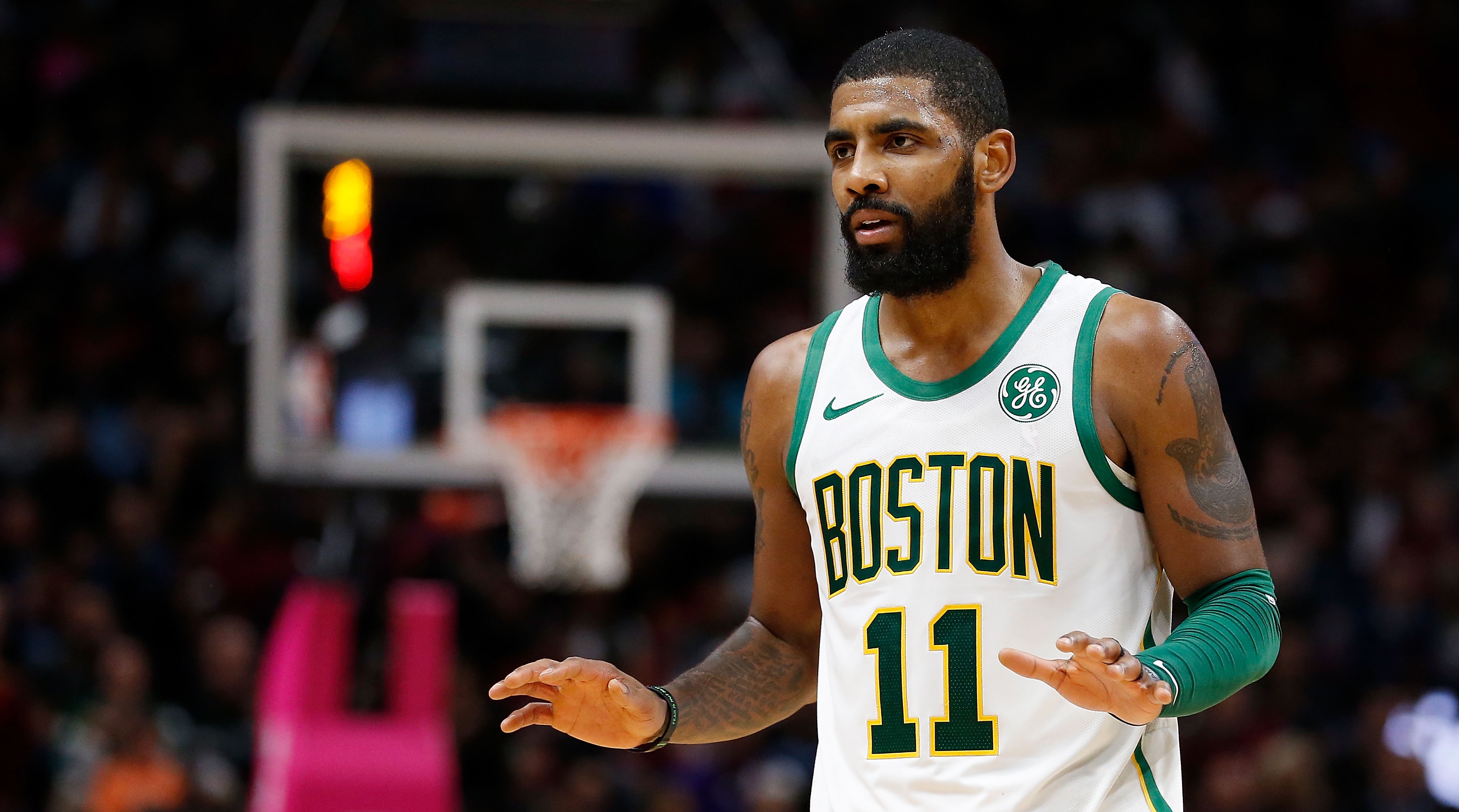 This is a really difficult thing to write, but deep down in our hearts, I think most of us as Celtics fans know the truth. It’s time to move on from Kyrie Irving. Let me first say I love Kyrie the basketball player. On the court, he’s one of the most exciting, acrobatic, clutch guys I’ve ever had the pleasure of watching on a daily basis. In my mind he’s the best ball handler of all time. The shots he can and often does make are ridiculous.

That being said, not only do the numbers show that we play better without him, but I think his attitude is toxic to the Celtics locker room culture. First, the numbers. In 11 games without Irving this year, here’s how we’ve looked:

Now I get that 11 games is a small sample size and a lot of those games are against bad teams, and I also get that typically high scoring guards like Westbrook and Lillard have similar effects on their teams defense, but this is only the first point in my argument. Now you can say that last year our offense scored 7 less points per game without Kyrie than with, but it’s clear from watching this team our offense has taken a big step forward, especially in 2019. Rozier, Tatum, Brown, Hayward (obviously) are all significantly better offensive players right now than they were this time last year. And we saw what they could do as a team in the playoffs. Although they couldn’t beat Lebron, having that experience is only going to make them better in the years to come.

I also understand that as currently constructed, this team benefits from Kyrie being on the floor. His clutch gene in the playoffs is up there with the best, plus having a backup PG like Rozier is huge. BUT, when I say time to move on, I mean it’s time to move on from treating Kyrie like the Crown Prince of Boston.

It’s time for Danny Ainge, the media and everyone else to stop acting like Kyrie’s ego is the only thing that matters. And here’s why:

KYRIE IS A FUCKING HEADCASE.

Listen to his interviews throughout the season and you’ll see what I’m talking about. First, he says if you’ll have me I want my number hanging in the rafters at the Garden. Then you having him calling out teammates, whining to the media, having hissy fits on the court to his coach and to a guy who’s leg snapped in half 15 months ago, saying we need veterans cuz these young bucks can’t cut it, saying he doesn’t owe anybody anything and only cares about himself. On top of that, all anyone wants to talk about is whether or not he’s getting traded, if he’s staying put, if we’re going to trade and pair Davis and Kyrie. It’s like he’s bipolar and he’s using the media as his shrink, but instead of doctor-patient confidentiality it’s the exact opposite of that.

The trade talk alone is enough to rattle young guys like Tatum and Brown, but when you also don’t know which version of Kyrie you’re going to have to talk to after the game that night, I can only imagine how that wears on these guys. Kyrie is like one of those crazy girlfriends from Entourage who you can’t stand to listen to but can’t look away from because they’re just that sexy.

With all of these things to consider, it’s no wonder why Marcus Morris said nobody is having fun. They don’t know if they’re gonna get yelled at for not being serious by a guy who needs to sit out a week because he ran around a screen the wrong way. He’s got everyone on edge and half these guys are too young to know how to handle it. Do you remember the first couple times you got yelled at on the job? When it happened to me, I was somewhere between “I want to punch this dick in the face” and “Holy shit I can’t believe I made a mistake,” so I just froze. Kyrie is not a good leader, and it’s no surprise because his role model in Cleveland was King Diva himself. Earlier this season Jaylen Brown, in response to Kyrie’s locker room ranting, said. “We can’t make comments. We can’t point fingers. We just gotta empower each other. If we don’t everybody’s going to go into their own little shell.” And Kyrie has been doing exactly…not that.

The icing on the cake with this whole thing is that Kyrie is going to play in the All Star game tonight after missing a week with a knee sprain, a part of his body he’s had trouble with his whole career predating the NBA. And this motherfucker wants to go play grab-ass with Lebron and AD in some bizarro-world Lebron’s All-Star Recruiting Night? It’s completely astounding to me that Danny and Brad have no problem with this, and are just like, “he’ll have a trainer with him so it’s cool.” Fuck off Kyrie.

*Side note: It’s very possible I have this all wrong, and it’s actually Kyrie doing the recruiting of Davis. I’ll eat my words if, months from now, Davis says talking with Kyrie at the ASG changed his mind and convinced him to come to Boston. Also, Kyrie can make this all better by shutting up with media and taking over for the rest of the season. Less ego, more hoop.