The 300s Previews Cage Titans XLIV: Joe Giannetti Storms Into Saturday With One Goal in Mind – Getting Back to “The Show”

Let’s GOOOOOO! As you probably saw Red worked some magic and your boy gets to live his MMA blogger dream Saturday when we get to sit cageside at Cage Titans, a premier New England MMA promotion.

This week I’ll be speaking with a few of the fighters competing this Saturday to get their thoughts on everything from the their upcoming bouts to the fight game in general.

Yesterday afternoon I got to chop it up with one of the baddest men at 155lbs in the commonwealth and The Ultimate Fighter 27 finalist Joe Giannetti. Looking to send the crowd home happy Saturday as the hometown headliner against D’Juan Owens, “Skeletor” gave us a peak into his training, goals, and how he sees this fight playing out. 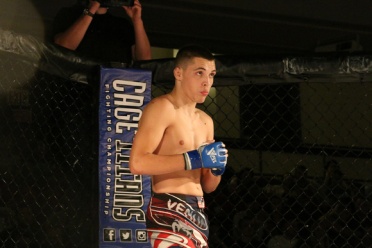 Gianetti: Well actually I’ve fought a couple times. November and in January. I actually wanted to fight in April but it didn’t work out.

The 300s: O ok I got ya, bad internet information (Note: Fucking Sherdog). In terms of your opponent D’Juan, he has a ton of experience. And unlike a lot of these guys with long records on the regional scene he has a winning record and clearly has some game. Does that change the way you prepare?

Giannetti: No, not really. I’ve been to the show, I know what I can do. I’m exactly where I’m supposed to be and just want to get this win and get back there.

The 300s: Absolutely, and I noticed he also goes after submissions, I think he has six to his credit. Going up against another grappler, do you see this as a big way to prove yourself.

Giannetti: No, not really man. I don’t need to prove myself. If his necks there I’ll take it, but I know what I can do on the mat. I’ve gone up against some really good guys on the ground. I’ve got up against brown belts and done well. I think my grappling for MMA stacks up with just about anyone. But I can do it on the ground and striking.

The 300s: Ya I was going to mention I was rewatching some of your fights and in particular your fight again Allan Zuniga. He like D’Juan is a shorter guy compared to you and you were doing this cool little thing where you were setting up a head kick to right hand or right hand to head kick upstairs. Really showing off your striking especially up top since you’re a taller guy. Is your striking something you are going to really try and show off?

Giannetti: Ya man absolutely. You know D’Juan does not stop coming forward. There have been guys who thought they could get him out of there and he just keeps coming. But he’s the kind of guy to take two to give one. And I’m not sure you want to take two from me. I don’t know if you’ll still be there.

The 300s: And how’s training been in general? How’s it been and how ready are you? Are you rested and ready for battle?

Giannetti: It’s been been awesome man. Trainings been great, weight cut has been really easy this time around. I was out at AKA (in San Jose, CA) and got some awesome training out there and just got home and I just feel great. I have so much more energy than I normally do and am not really worried about weight or anything. I feel great.

The 300s: Nice, you mentioned weight cut being easier this time. If you don’t mind me asking is it something you changed nutritionally or is just growing as a fighter and sort of things just getting easier?

Giannetti: You know it’s a combination of things. Nutritional, timing, how I work my camp out timing-wise. I’m just really at peace this time around. It’s weird. I never had a problem with the weight but I was always worried about it. This time I’m at peace. Again I’m where I’m supposed to be and everything is going right.

The 300s: Switching gears, I’m sure everyone you talk to this week is going to be saying “UFC, UFC, UFC” since you’re coming off the show, but you’re obviously still a younger guy, one year, two years, a few fights down the road where do you see yourself? A few more with Cage Titans? Do you see maybe testing out one of these other promotions like ONE? Where do you see yourself going?

Giannetti: The UFC man, I’m going back to the show. That’s my only goal. Like I said it’s where I belong and it’s my time. I’m getting back and I’m not going anywhere. 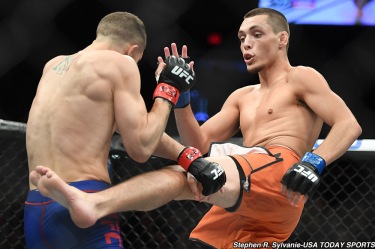 The 300s: One last fun one before I let you go. I saw a couple fights into your career you fought a guy with 63 wins at the time? I think he now has 88? How did that come together?

Giannetti: Ya ya, Jay Ellis. Basically I just had an opponent drop out and Jay took the fight to fill in. Honestly? I think I got the best Jay Ellis there’s been, at least recently. He gave me a really hard fight. Jay came to fight that night and really brought it. You know those fights are tricky man. We planned for a different opponent and then get a different one we’re just expected to beat. It can come back to bite you.

The 300s: Sure, happened with T.J vs. Soto, Khabib vs. Darrell Horcher, they didn’t have the easiest nights. Sorry going down my sheet I do have another: I know you’ve been on the big stage under the bright light of the UFC now but you are the headliner of the home town card this weekend, you are definitely “the guy” on this card. Does that give you any extra motivation? Does that feel pretty cool that when people show up Saturday they’re probably there to see you?

Giannetti: You know what, ya man it does. I really do feel like it’s my time. I feel better than I have in a long time and I feel like I’m exactly where I’m supposed to be. That’s why the top welterweight in North Carolina is coming up here to fight me at 155lbs. I’m just looking forward to fighting and winning this Saturday and getting back to the big time. This is what I’m supposed to be doing.