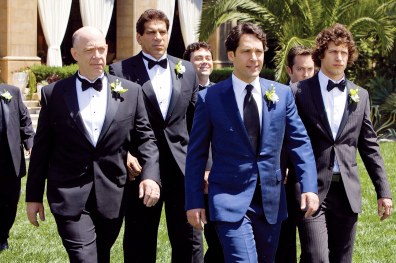 Well, dear readers, this shall be a week indeed

I’ve been asked to keep this part brief but you may or may not have heard reference to a certain wedding occurring among the wordsmiths of the 300s this summer. Time sure does fly because the hour is nigh. All I’ll say about that but needless to say it’s caused me to feel inspired aroundst a keyboard.

I’ve attended I think a dozen or so weddings in my life. That part probably doesn’t shock you so much as if you size up a 30-year-old male who is average in every way possible I think that sounds about right.

What may shock you to an extent is that I’ve actually been asked to participate in several of these life changing, or should I say, making, affairs. Sure, once was as an altar boy, but indeed a few times now I’ve been asked to stand up next to one of my buddies as a groomsman. Taking it one step further, believe it or not on a single occasion I was asked to be the head honcho, the best man. True story.

I think it is easy to just see being a groomsman as a sort of cool nod to a particularly strong friendship. Tangentially, I suppose, if you are an insecure bumblecunt (word learned from British/Irish twitter recently, so great), I can understand why you could see even it as a status symbol. But in reality, you are being given a job. If you really think about it, you are being asked to represent the friends that have surrounded two people through a journey that is now culminating in a roll of the dice that they can actually be able to stand each other forever. Not to get too sappy but that’s pretty fucking special man.

So if you’ve read this much and even slightly agree with my take on things, allow me to regale you a few rules to groomsmanship.

1.) First and foremost never let it slip your mind for even a single second that this is the bride’s day/weekend/week/month.

This as much of a self-preservation rule as it is a “don’t be that guy” rule. Everything following this golden rule will cover our garden variety debauchery and contraception, but this is a blanket commandment for not ending up on the receiving end of a lifelong grudge. Just keep yourself out of the bride and her family’s fucking crosshairs. You should notice them but not the other way around. I would say “unless for a good reason” but honestly I’ve been noticed for good reasons before and guess what? I was simply noticed after that and couldn’t really get away with shit. Bottom line: Behave yourself when you’re within 100ft of the one in the white dress and/or her parents.

2.) Do everything and anything that needs to be done

You’re not at this wedding “to work” but you sort of are. In a weird way you’re expected to have some responsibility, and I don’t mean for anything in particular. But if something needs doing it should be you or one of the crew doing it. This could be golden rule 1b. Now this does not mean you have to be a saint. I’ve gone absolutely ruckus at weddings I was in, believe me. But when the time came, whether I was hungover, about to close, etc. I stopped what I was doing and pitched in. And that includes being proactive. One of the other groomsmen is too drunk and you notice? Get it done. One of the bridesmaids is crying? You’re Affleck when he sees Claire in the laudromat. I guess my point is you need to step up when It’s necessary

What I mean by this is understand what you, as you, are going into. Sometimes your best friend is getting married but they have a shit ton of friends you don’t know, but they all know each other. Sometimes you know everyone. This realllllly should temper how you behave both in general but also how you approach things like…..well women. Or men, that’s cool too. But many a sucker punch has been earned at these things because someone started hitting on, successfully or not, ex.) someone’s buddy’s cousin’s frat brother’s ex-girlfriend. It’s dumb but it happens. Know these things ahead of time. Hopefully in the months or whatever leading up to the event you’ve gotten to know folks at least a little and got to feel the situation out. There’s been a hangout of sorts. If not idk man, peruse IG or something.

For anyyyyyyyything. There may be some down time and the hotel bar might be closed and you might be hungover as all holy hell five hours before the wedding and you might be in the middle of nowhere Maryland. ID where the packy is the night before and stock up. Have a “sure thing” at the wedding and not quite ready to explain to a four year old why they were born 9 months after “Uncle Mike” and “Aunt Sarah who hates you because her sister, known as Mommy, is stuck with you now” were married? Bring something to prevent that. Bring another kind in case they’re allergic to the first kind. Bring a third kind in case you both forget the first two on the night of. Summer wedding? Bring sunscreen. Bring a hoodie, just in case. Bring two, because maybe you don’t have a “sure thing” but there are a few young lasses that might get cold I AM LITERALLY GIVING YOU EVERY TIP I HAVE. Just be prepared. Christ.

5.) Don’t get drunk to the point of injuring yourself or others

I mean this one’s tough. It’s a wedding. I’m not going to tell you not to get shitfaced. I’m not going to tell you to feel guilty if you do and people get mad at you. But what you can’t do is ruin anyone else’s good time in the process or hurt yourself causing other people to have to take care of you. I had a friend who a few summers ago straight up fell off a deck down the Cape and knocked himself out. He’s legit insane so he simply popped back up and kept going about the night but seriously, take care of yourself.

6.) Have some fucking fun

Last but not least have fun. If girl #1 shuts you down don’t mope. Don’t pick a fight if you have a bad night. If someone else in the party is a Yankees fan don’t stab them with a salad fork. If you are given the salmon just fill up on cake and rolls. Again, this is one night to celebrate two people that ostensibly mean a lot to you. Enjoy it.