There are those out there who are going to roll their eyes hard after reading the headline or think this is just another article trying to pander to certain groups and capitalize upon the success of recent social movements. I can’t stop you from feeling that way, and I’m also not going to sit here and pretend to be the world’s biggest soccer fan. I am certainly not.

But it still doesn’t change the fact that the U.S. Women’s National Soccer Team should unquestionably be considered as one of the most important and iconic teams in the history of American sports. (No, but really though. I’m not exaggerating in the slightest.) Yet, for some reason, while many are indeed celebrating the team’s epic World Cup run this year, there are those out there who have gone out their way to vilify and criticize the players for various reasons which are just becoming absolutely absurd. And to be honest, I just couldn’t keep my mouth shut anymore.

It all started after their 13-0 SHALACKING of Thailand back during group play on June 11. I think everyone already knew the U.S. was going to blow through the opening stage, but nobody was expecting such a devastating evisceration on a global stage against a team that, while certainly nowhere near as talented as the U.S., was still playing in the freaking World Cup! At least show up! 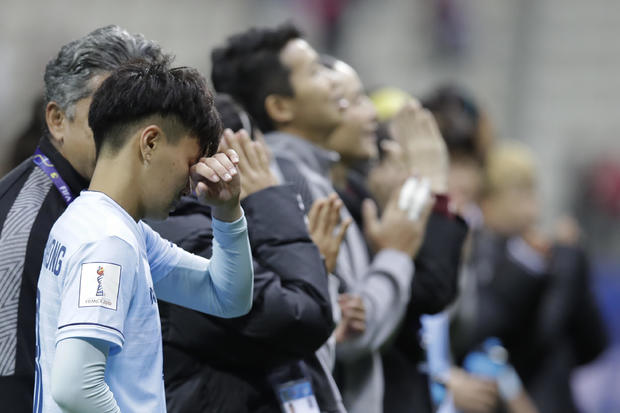 That had to hurt, but come on!

As if all the “running up the score” chatter after the game wasn’t bad enough, the team was more so criticized for being too “arrogant” and “celebrating too much” after each goal. After all, that “poor Thailand team” didn’t need to continually be “taunted” and the U.S. women should have shown “more respect.”

Couple things: 1) They weren’t outright targeting or taunting the opposing players during their celebration. They were simply enjoying the moment with their teammates; 2) The World Cup is something that comes around every four years, but it is something that these women train for each and every day of their lives. Do you know how hard it is to score a goal in soccer, no less during what is the biggest sports tournament in the entire world? I’d celebrate every damn one of my goals, too!; 3) There is nothing – NOTHING – in professional sports that annoys more than the “running up the score” complaint. Again, the point of soccer is to score goals and stop the other team from doing the same; if you are a team of world-class athletes, going against another team of world-class athletes, that entire argument goes out the window. If you can’t stop them, that’s on you. Do better next time. That simple.

The team then went on to beat Chile and Sweden before the single-elimination Round of 16 began, only to follow that up by beating each of Spain, France, and England by the exact same score of 2-1. They now have the chance to try and win it all this upcoming Sunday.

Before yesterday’s match with England, however – after playing four whole games since beating Thailand – the British media still made sure to point out how “arrogant” (apparently this is the buzz word everyone is using) the U.S. team was with B.S. like this:

Greetings from London, where I am injecting this into my veins. pic.twitter.com/ULthPGTfEC

Just absolutely pathetic. Again, the players got their vengeance by ultimately winning the game, and at least the English players were very humble and accepting of their defeat, choosing to blame themselves afterward instead of an incredibly talented opponent who did absolutely nothing wrong.

BUT WAIT, MATTES! What about this little gesture from Alex Morgan after scoring what was ultimately the game-winning goal??!! See, what a cocky A-hole! SO UNNECESSARY!

Go on, @alexmorgan13, what a birthday! pic.twitter.com/Rge0HMMrCk

Come on @Lionesses – make these cocky yanks choke on it. pic.twitter.com/lOybEhNRGT

First of all, don’t even get me started on Piers Morgan. Secondly, this won the game and it was hardly anything worse than a little ribbing of our friends across the pond. At least she wasn’t hoping for “cocky yanks” to “choke on it.” Also, it was her birthday, she had just punched her team’s ticket to the championship game, and she was feelin’ herself a bit. OH THE HUMANITY!

Look, I can understand the flak coming from other countries; it’s all a part of the fun. Also, I don’t think the whole “ignorant, arrogant American” sentiment is being attributed solely to U.S. women’s soccer players. (NEWS FLASH: This is how we are viewed by much of the world anyway, average citizens included.)

But again, what bothers me most is the constant backlash they’ve been receiving from those in this country and the incredibly unfair double-standard they have been subjected to. If this was the U.S. men’s team, would we be getting on those guys for celebrating or showing emotion on the field? Nope. It would just be a part of the game, and nobody would think twice about the completely non-essential screaming and shirt-removing that occurs after almost every score.

And above all, how about Megan Rapinoe, one of the USWNT’s greatest all-time players and a true hero for those in the LGBTQ community, being ostracized just for speaking her mind? She is getting ripped to shreds for simply stating that she would not go to the White House (while also saying the “F” word!!!) – which is actually something she said months ago – and continually clapping back at Donald Trump on a variety of issues. The rest of her teammates have done nothing but simply support her, with most not really adding much more commentary other than the fact they believe in what shes doing. As a result, they’re being called “unpatriotic” and are being shunned entirely by a lot of people, many of whom I know personally. In fact, I saw one friend who said they would go so far as to root against them, solely because of Rapinoe’s comments. Just wow.

The fact is that these are a bunch of ladies who are damn proud of who they are in every way, and they’re not afraid to show it. Good on Rapinoe for standing up for those who are still fighting for their rights in this country. Or how about the law suit they filed against the U.S. Soccer Federation in March due to the ridiculously unfair pay they receive as compared to the men’s team, who cannot even hold an effing candle to the success that the women’s team has achieved over the years? But still, the men make millions upon millions more for literally zero reason. This was the first time anyone had ever dared to challenge something which most had just decided to accept for far too long. This team will not take anything lying down, on the pitch or off.

And worst of all, the surrounding commentary is taking attention away from their actual play on the field, which has been astounding. Again, I’m not using hyperbole here; this is one of the best teams I’ve ever watched play, in any sport. OH, and they’re also the defending champs. How about we talk about that??!!

So if you’re one of those who simply has no interest in the sport and couldn’t care less about what this team does on Sunday, that’s fine! I totally understand that. But if you’re going to try and paint these women as anything other than true American heroes after everything they’ve accomplished – and are still trying to accomplish on so many levels – then you are just plain ignorant.

You don’t have to like some of Rapinoe’s comments, or perhaps even some their “celebrations.” But stop making them out to be bad people. That’s just not right. If anything, there might not be any better group of role models for young girls in this country, both in terms of how to be as a person and as a great soccer player.

OK, I think I’ve made my point, and I’ll end my rant now. All I know is that I, for one, will be rooting hard for them to take home the gold this weekend, and I know many others out there will be right there with me. Happy Fourth to one and all, and here’s to hoping our ladies continue to make our country proud.