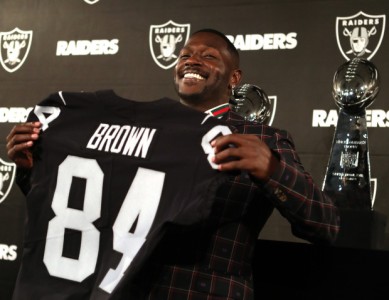 The Washington Post – “I feel like Colt, obviously, has the edge because he has the knowledge and ability as well,” Peterson said. “He’s been shown to have a really strong arm and been consistent as well.”

ProFootballTalk – “My feet is pretty much getting circumcised, right? Right? For real,” Brown said to the NFL Films cameras after pulling off his socks. “It’s kind of like a pull back right now. I’m [expletive] circumcised on my feet. Hopefully my feet are born again, and I figure to run faster. Feel sorry for me later.”

A couple of stories here to get you through the doldrums of Pats camp when you’ve read all you can that day. Sure, we all care most about what is happening with our Patriots, but it is never a bad idea to check in elsewhere. Actually, it is a cautionary tale, a reminder to savor the fact that we’ve had it so good for two decades. We could easily be part of the stories above.

Contestant number one has to come with the qualification that I am indeed a Colt McCoy fan. I think if he never got bumblefucked in the National Title Game to the point where he couldn’t feel his own damn arm and then was brought along gradually in the NFL he could have been a top 20-15 QB. Alas, it wasn’t to be. So now this headline is funny instead of tantalizing. The best part is of course we have AP inserting himself into a conversation he has no business in. If you weren’t aware, AP is kind of just an asshole like that. A bit of a pot stirrer. So now poor rookie Dwayne Haskins, from THE Ohio State University, has to look at his D-End sized RB every time he breaks and the huddle and know that the guy would rather have Ol’ Aw Shucks over there under center. Ain’t that a bitch?

And contestant number two features Antonio “The Biggest Diva Wide Receiver Since Keyshawn” Brown having no respect to ancient Jewish traditions. Circumcised feet? Never! Keep in mind this is a millionaire athlete who did not know how to properly insert the body he inhabits that is worth said millions into a cryo-therapy chamber. Nor did he think to ask the staff how to do it in order to not break said million dollar body. So he just said, “hey, how hard could it be?” and cost himself and his team 10 practices where he could have been building chemistry with Derek “I may now have too much trauma to succeed” Carr under the guise of notably batshit head coach Jon Gruden. AB, you’re a role model for every “scrappy” WR just “trying to make the team”.