One Foot in and One Foot Out: Patriots to Watch in the Third Preseason Game 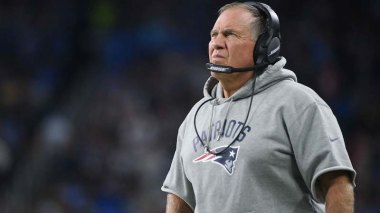 Patriots.com – The Patriots will square off this Thursday against the Carolina Panthers in a preseason Week 3 matchup for the fifth time in the last six years and for the second straight season. The Patriots played at Carolina last season, a 25-14 loss.

Week 3 of the preseason is often called the “dress rehearsal” for the regular season. It is where a lot of projected starters play for extended periods of time, most notably the Quarterback, and where we get a real glimpse into who could start Week 1.

Beyond that, based on this game we could also infer, both via playing time and whether or not they play at all, who is on the verge of making the Patriots roster and, well, who isn’t. So besides seeing two solid quarters of Tom Brady under center before he mayyyybe comes out for a hand off next week, there will be some drama unfolding Thursday night as we can attempt to read into who is playing what match ups and when and what is says about their chances to be on the squad this year.

Lets take a look at a few of those guys who have both made strides and fell behind in their quest to play home games in the Greater Providence area this fall.

Duke Dawson – Like a budding summer romance, I still remember the elation in the wordsmithing of all the sportswriters who championed the Patriots’ pick of the Florida Gator last fall.  What a steal in the second round. He’s fast, he has a nose for the ball, and like any Belichick corner he can tackle. Well, so far really all we’ve been able to deduce is that he can get burnt like toast. Throw that in the pot with the revelation of Jonathan Jones and J.C Jackson and the drafting and then development of Joejuan Williams this spring, stir it up, bake it, and what comes out are Duke Dawson left out cupcakes. with all of that said, The Pats are known to make a surprising move or two every camp, and Belichick has shown a hesitance to cut his early picks so soon (Chad Jackson got two years on the squad. Chad. Jackson).

What to look for – If Dawson does see legitimate action against Carolina then it’s possible The Pats will keep him and jettison Jason McCourty, who has had a weird summer (we’ll get to that). If he doesn’t play much at all or sparingly it means that thanks to his pedigree and draft position that Belichick and Co are most likely fishing for a trade partner. If he is indeed relegated to mop up duty then well, it is simply the end of the road for one of our three alliteral cornerbacks.

Braxton Berrios – The feet Berrios was given for hands aside, you can’t help but kind of feel for the other second year player on this list. First, he came in with fans and media speculating, probably incorrectly, that he was the heir apparent to Julian Edelman. Just a true blue NFL legend and now Super Bowl MVP, no big deal. Then he tore his Achilles and missed all of his first year, a huge blow for a guy transitioning to the pros with such expectations on his shoulders. Finally this year, when he was supposed to come into training camp with a clean slate and work his way onto the depth chart, UDFA rookie WR Jakobi Meyers came out of the woodwork to become the star of the Patriots’ summer (more on him later). So let’s assume Edelman (1), captain clutch Philip Dorsett (2), and 1st Rounder N’Keal Harry (3) are locks. Let’s also say that the team is at least going to give Demariyus Thomas (4) a shot in the next two weeks considering they’ve kept him thus far. If Meyers (5) crushes it in preseason game three then that leaves, usually, one more slot (6). Berrios is going to have to battle journeyman Maurice Harris, a converted CB named Gunner Olszewski, and a couple of other unknowns for the last spot. That’s also assuming we keep six WRs out of camp, which we may not. Tough going for a guy we had high hopes for at one point. But hey, there is always what I mentioned before about Belichick giving his high picks every chance to shine.

What to look for – Simply put if we don’t see Berrios in the slot for any meaningful downs when Brady is on the field then that is probably it. With that said, if he goes on to get fed later in the game then it could just be he’s penciled in as WR #6 and the team didn’t want to waste meaningful TB12 reps on him.

Mike Pennel – Pennel had some substance abuse issues (I’m guessing weed) a few years back but otherwise has been a quite solid, stout DT for the Jets and Packers. So it has been a big disappointment that he has been outplayed, and thoroughly, by Byron Cowart and at other times by David Parry. This one is the hardest to predict as Belichick prefers his DTs meaty and Pennel really fits that bill (wink nudge). Still, my guess is his seat is getting a bit hot.

What to look for – Pennel to make a play, plain and simple. Maybe more than one. If he gets dominated at the line and pulled that could be it for him in New England.
What….Are You?

Derek Rivers – Another once highly celebrated pick who missed his rookie year with an injury. Once labelled a steal, Rivers has yet to make good on the promise he flashed. This preseason he has been moved off the line a bit as the Pats are possibly going to show a lot more 3-4 fronts. Early reports on his performance were good but now Rivers is hurt again. All indications are that he’ll probably make the back end of the Pats LB rotation but it may be hard to justify since he never, you know, plays.

What to look for – Tough call considering Rivers might not play due to the aforementioned injury suffered against the Titans. What that translates to is that I gueeeesss if we see guys at the dead back of the group like Munson getting a lot of snaps it could mean they are saving a seat for Rivers. If he plays, he better see some quality first half time and hear his name called.

Jason McCourty – For the second year in a row it seems like McCourty is fighting for his spot. Last year there was speculation he’d be cut before becoming a damn good CB during the Pats Super Bowl run. But the more things change, the more they stay the same and with the emergence of both J.C Jackson and Jonathan Jones, McCourty seems to be on uneasy footing, even getting a look at Safety to see if there is anything there. That said, I don’t think his spot is in jeopardy. Although this is the strongest group of corners I can remember the team having. McCourty’s veteran presence and ability to play more than one spot should keep him employed.

What to look for – If he indeed sees some significant snaps at safety, even later in the game, my eyebrows may threaten to rise. Same if he sees next to none at CB. Those extremes aside, McCourty should be fine.

On The Bright Side

Jakobi Meyers – ::Bigggg exhale:: Folks there was a training camp not so far back where an unheralded, unheard of rookie made plays all over the field and made us fans think we’d found a steal. Another Brady-esque diamond in the rough. His name was Zach Sudfeld, and he was nicknamed “Mini-Gronk”, a reference to his All-Everything counterpart in the Tight End room (despite being the taller of the two). Sudfeld indeed had a hell of a summer. And then was cut. He had a cup of coffee with the Jets and probably one or two more teams before never being heard from again. Such is preseason. So I am REALLY trying not to get onto this Meyers bandwagon only to get my heart broken. I probably look like a BFI employee hanging off the garbage truck. But man has he looked good. He’s just a “football player”. Great hands, great routes, even seems to have built a rapport with Brady. I’ll stop here.

What to look for – Big snaps and a big performance with the 1’s means he’s in. Anything else I REALLY DON’T FUCKING KNOW.

Damien Harris – For all the talent the Pats have at RB we don’t really have a true rock toter behind Sony Michel, who himself can be scheduled to miss a few games per year. Therefore, Harris could become our true #2, seeing 12ish touches per contest. The huge question mark is whose touches is he taking? My guess? The more expensive and oft-injured Rex Burkhead, who although I did not write up here, may be on his way out. Anyway, Harris has shown impressive vision among other things this preseason.

What to look for – If the kid just goes out and has some fun he could lock up the back up spot, starting when Michel is hurt (which I don’t wish for but come on).

Chase Winovich – Another rookie. Despite being a high selection Winovich was immediately declared a developmental prospect and kind of a tweener. Guess what? The Pats love tweeners. Since he put on pads all “Wino” has done is spend so much time in opposing backfields he has forgotten which team he plays for. With Rivers hurt, Michael Bennett probably on some sort of “pitch count”, and the Pats love of switching up looks, Winovich probably should plan to play a lot.

What to look for – I dunno just a crack a beer and enjoy man. Kid is a lot of fun to watch.