The 300s First-ish Fantasy Football Round Up Of The Year – Booms, Busts, and Sneaky Picks 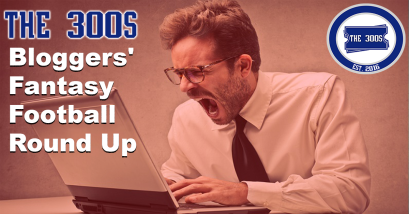 Welcome back, to your favorite fantasy blog as well as mine. It has been a wild ride in the NFL since last fantasy season ended and plenty of players changed teams, retired (COME BACK GRONK), and entered the fold.

With draft season already underway, to be honest (we have jobs leave us alone) we’ve picked the brains of the knowledgeable staff here at The 300s to bring you some players that are a sure thing, some to avoid, and a few to take fliers on later in your draft. Lezgetit.

I am all in on James Conner this year because the guy is the real deal and even if he’s a JAG, he is still playing in Pittsburgh, which has produced a top 5 RB in each of the last 5 years with three different guys. BUY!

Avoid Antonio Brown like the plague this year. The guy has done everything but tell his infamously prickly coach to go shit in a hat. Shooting his way out of Pittsburgh, now the absurd helmet debacle, oh and lets not forget the guy wrecked his feet in a cryogenic chamber. Thats before we even get to the fact that Derek Carr is throwing him the ball, a guy that his own coach doesn’t even believe in. Pass.

My sleeper pick for this year is Ryan Fitzpatrick because you know for a fact he will post 3 or 4 straight weeks of 40 point games as the Dolphins get blown out by anyone and everyone. Pump and dump baby.

I see this as the draft of the cuff running back. I’m buying on Ekeler and Jackson from SD, Henderson from StL, and Pollard from Dallas. It sounds like St Louis is wary of an ongoing injury for Gurley with all of their roster moves in the offseason, and if Gordon and Zeke continue to hold out, those other guys are there to fill the gap. So while I’m not necessarily calling anyone a bust or sleeper, that’s who I’m looking at.

Red sort of stole my James Conner idea. He killed it for me last year. With him gone I’m going to go with David Njoku. Ya he’s a Tight End but there are only a handful that are going to produce at such significant levels as I think he will. Add that to Baker Mayfield is settled into year two and the former Hurricane is in for a big year.

I’m staying away from the Dallas football Cowboys. The whole team. It just sounds like a fucking disaster over there and God help them if anything happens to their vaunted offensive line.

For a sleeper I’m going with old friend Chris Hogan. Cam’s receivers occasionally have huge games and he never has had a consistent security blanket in the Hogan mold.

People forget just how good Allen Robinson is. He put up 80/1400/14 with BLAKE BORTLES as his QB in 2015. The last two years have been rough for him injury wise, but all reports say that he looks healthy and has been a focal point of the Bears offense. If Trubisky and the Bears offense takes the next step, look out for a big time year from A-Raw.

I am not touching anything with the Cincinnati offense. The Bengals might have the worst offensive line in the league and with no A.J. Green to start the season, defenses will key on Mixon and give him little room to run. I’ll pass here at where he is typically getting drafted.

So this may take a little while to pan out as Harris is not getting a ton of reps at training camp, but the Patriots took Harris in the third round for a reason. We all know Sony Michel has degenerative knee issues, so the smart bet will be that he isn’t going to hold up for 16 games. If the Patriots trade Rex Burkhead like I expect, Harris is going to be a must-own and will pay dividends as we get deeper into the fantasy season.

I’m really hitching my wagon to my BOOM guy this year. Not only have I already chosen the second-year back as my keeper this season, but I’ve also already been telling everyone and their brother how good he is at pretty much every opportunity I’ve had this offseason. Some are sleeping on him after he played in just 10 games as a rookie last year. OK. Yet, when he was on the field, he still averaged 5.4 YPC and displayed the talent which helped him become the 2017 SEC Offensive Player of the Year at Auburn. He’s also a PPR monster, and with Theo Riddick now entirely out of the picture, he could easily approach 60-70 catches in 2019. Also, his new offensive coordinator, Darrell Bevell, loves running backs more than his own family and has seen his rushing attacks finish in the top five for each of the past six seasons he’s coached – including two-straight No. 1 finishes. The only thing I could see hurting Kerryon is C.J. Anderson, who could steal a few carries here and there, especially on the goal line. But it won’t be enough to prevent Kerryon from being a top-15 running back this season – if not even higher – especially in PPR formats.

Let me start by saying perhaps it’s a bit unfair to label an undrafted free agent who totaled almost 1,300 yards as a rookie as a BUST in any way. Lindsay was awesome last season. There’s no doubt about that. But this is about this season, where things have changed significantly out in the Mile High City. New coach. New quarterback. And above all, there’s much healthier direct competition than there was at any point last year. While Lindsay stole the show last year, he only had the chance to do so because the team’s other rookie running back, Royce Freeman – whom the Broncos actually drafted in the third round after a standout career at Oregon – was slowed by nagging injuries all year. Freeman’s been getting rave reviews all offseason for how good he’s looked, and the team has already said he’s going to get plenty more opportunities to showcase himself this year. Theo Riddick is also now in the picture, too. I’m not saying to avoid Lindsay entirely, and he could still end being a solid low-end RB2. But drafting him as a foolproof, bellcow RB1 this year is a big mistake.

It’s funny how just last season this guy was a locked-and-loaded first-round pick. Now, he has an ADP of 2.11 in half-point PPR leagues, and I’ve even seen some mocks where he’s not going until Round 3. Have people forgotten how good this dude is? He was an absolute animal at LSU, and he had a fantastic rookie season in 2017 before being slowed by injuries and dumb off-field behavior last year. Apparently, though, he’s learned from his past transgressions and is working hard to get back on track. There’s also reports that they’ve got big plans for him in the passing attack, and the team finally has a quarterback who is actually, ya know, GOOD at football. And above all: Fournette literally has ZERO competition. Seriously, I might even be able to crack the depth chart behind him. Fournette is someone whom I could easily see piling up 1,300 yards on the ground with 10-plus TDs and 40-50 catches to boot. I’m expecting a huge bounce-back year from this dude. Big time.