The 300s Reviews the Redskins FedEx Field: A Stadium Worthy of Its Team

Week 5 has come and gone along with Redskins HC Jay Gruden. To be honest, I’m surprised it took this long. The Redskins have been trash for a while now. After winning the division with a 9-7 record back in 2015, they sit at 22-30-1 over the last 3+ seasons and haven’t finished better than 3rd in the NFC East since 2015. Gruden’s firing was even less shocking following the release of this video:

Ha. The ol’ “I’m about to get fired, guess I’ll rip joints and cheat on my wife in public now.” Classic. Way to go, Jay.

Gruden garbage aside, I had the (dis)pleasure of attending this weeks Patriots-Redskins game at FedEx Field. From the moment I first hopped on the metro in Arlington, Virginia, this felt like a home game. Patriots fans were everywhere, and it only felt more packed with nautical blue the closer I got to the stadium. The walk up felt pretty similar to walking to Gillette, considering all the Brady jerseys walking down one long road.

I typically tailgate with my buddies at the Seasonal about a mile from Gillette, so I don’t really know what the actual stadium tailgates are like. That having been said, I was not impressed with the Redskins parking lot scene. There were plenty of Skins fans grilling, but there was a ton of empty space in the lots and barely any sense of the pregame atmosphere that makes tailgating fun. However, there was this guy:

The stadium itself felt like a relic; an ancient gridiron from the days of the leatherheads. Turns out, the place was built in… 1997! I couldn’t believe it. For only 22 years old, I couldn’t believe how worn the place felt. The entrance was also confusing, and didn’t make clear where you were supposed to go until you had already gone in the wrong direction. There were huge beams obstructing views all throughout the 200s, completely blocking off any view of the sky as well as entire 15 yard chunks of field. 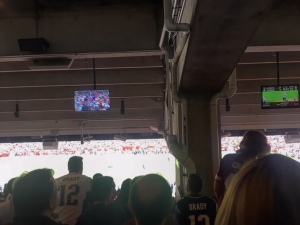 That kind of thing is permissible at Fenway because it was built over 100 years ago, before stadium planning and design was a thing. But to build something at the end of the 90’s when your team itself is 60+ years old is downright embarrassing. Although I suppose that’s what happens when you’re owned by Dan Snyder and your team name is the R-words.

If you do decide to go to a Redskins game at FedEx Field, wait until the absolute last minute to buy your tickets. My buddy and I literally bought our tickets as we were walking into the stadium from the tailgate, and paid $120 for seats at the 35 yard line. 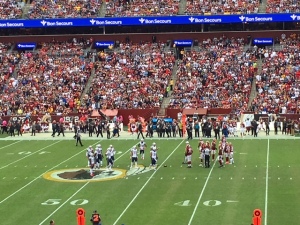 Granted, our original seats were obstructed, but there were enough empty seats that we could move around and find a few empty seats here and there. We could’ve bought tickets in the 100’s at the corner of each end-zone for a similar price, or in the 300’s for $70-80. If you buy more than a week out, you’re looking at $180 minimum for seats way up in the 400s. At the end of the day, I would probably go back, but I wouldn’t spend more than $100 and I’d avoid the 200’s unless it’s in the first 10 rows.