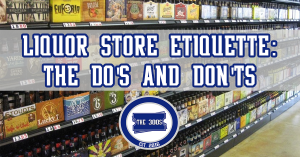 Over the years, much has been written about the trials and tribulations of the retail worker. It’s been well documented that employees working in the retail and service industries often deal with the underbelly of society and the ugly side of people you would otherwise think are respectable, upstanding citizens. I’ve personally worked in retail for over half of my life, and have worked in the alcohol industry in particular for nearly a decade. In that time, I’ve seen a lot. In the span of a few posts, I’d like to share some insights from my side of the counter in hopes of creating a more aware, educated public that will stop being such fucking idiots when trying to perform the relatively simple task of picking out a 6-pack.

As a disclaimer, all of my experience comes from working in cities and towns outside of Boston. Most of this comes from one shop in particular, and I can only imagine that people working in more urban settings have even more outrageous stories to tell. First, a little about why I’m qualified to tell you to fuck off. I started off as an entry level wine associate reading, doing tastings, and most importantly, drinking. Eventually I worked my way up to becoming a beer buyer and manager for a craft beer and wine shop in a Boston suburb. I’ve been in this particular role for about 17 months, but have amassed a wealth of knowledge when it comes to beer, wine and spirits over the course of my career. I am a Cicerone Certified Beer Server, the first step in becoming a Cicerone, although anyone who has gotten this certification will tell you it’s pretty basic and nothing to brag about. I wouldn’t call myself an expert on any aforementioned categories of alcohol because the more you learn about this stuff, the more you realize there is to learn. All I would say is this: I am a professional drinker; that is, I drink professionally.

What follows is the first part in a multi-part series of what to do and what not to do when interacting with the staff at your local liquor store.

1: Don’t Piss Your Pants on the Sales Floor

This would seem like an obvious one, no? Well guess what? This happened to me. One typical Tuesday afternoon, a construction worker guy came into my store demanding to know where the Twisted Tea Raspberry tall boys were. I explained to him that we were out and they would be coming in tomorrow, but this didn’t do. He told me he’d settle for a regular Twisted Tea tall boy, but needed to use the bathroom. At almost every liquor store I’ve worked at (5 in total), we’ve kept broken bottles and other crap in the bathrooms, so they are off limits to customers. The last thing we need is someone filing a lawsuit because they cut their wiener on broken glass while trying to piss. This guy didn’t like that answer, and next thing I know, we’ve got a Billy Madison Miles Davis situation going on. I let him use the bathroom, but needless to say he was banned.

My least favorite people to deal with are the regulars who don’t understand what they actually like, and insist they want the opposite of what they actually like. They hear buzzwords like juicy or fruity or jammy, and think for whatever reason there is something wrong with these words. I can’t tell you how often we have people insist they don’t like sweet wines but end up with a red blend with more residual sugar than a bar dark chocolate. They may not necessarily taste sugary because things like tannin and acidity can dull perceived sweetness, but that sugar is still there. Also, why do people insist on wanting wine that isn’t fruity?

These people, and Big IPA guys. Fuck, these guys suck. The majority of these guys drink one of two things: Bud Light or a “Big IPA.” These are the type of guys who don’t drink fruit beers because their hyper-masculinity tells them that fruit beers are chick drinks, yet their preferred method of intoxication is either alcoholic rice urine or canned orange juice. These are the same guys who order a Sex on the Beach in a whiskey glass without the umbrella because they don’t want to look gay. Hate to break it to you Bro McCarthy, but you like fruity drinks. What’s the hallmark of the New England IPA that has the beer world clamoring these days? Low bitterness, soft mouthfeel, high alcohol, and…you guessed it, TONS OF FUCKING FRUITY HOPS. Not to mention the fact that the difference between most of these beers is so minute, you’re basically just drinking one of three things…

At the end of the day, nobody should feel ashamed about what they like. There is no such thing as a gay drink, a chick drink, or a dudes drink. Everyone drinks everything. But the more honest you are with yourself about what you like, the easier it will be for the staff at your local shop to recommend things you like. We’re living in the golden age of alcohol with a ton variety out there across beer, wine and spirits. Unless you’re a professional or have the wallet and liver to constantly try new things, you’re going to need some help, and I’m willing to do so. In part two of this series, I’ll dig into when it’s acceptable to return stuff, why trophy hunters are obnoxious and who should bring their ID.