How Team USA Could Save the Celtics

After what was an absolute tornado of a start to the NBA offseason, things have since settled down quite a bit. Most guys around The Association are now currently lounging out by their opulent backyard pool oases or living it up on some private Carribean island, getting as much R&R as possible before things start ramping up again in late September.

Go ahead. Live it up for now, Bron Bron.

But for some – like the Celtics’ very own Kemba Walker, Marcus Smart, Jaylen Brown, and Jayson Tatum – there is no rest for the hungry. This past Monday marked the start of training camp for Team USA out in Las Vegas, and the aforementioned quartet make up just four of the 15 players vying for the final 12 spots on the roster that is set to play in the 2019 FIBA World Cup, which begins on August 31 in China. (The U.S. is scheduled to play its first contest on September 1 against the Czech Republic.)

While many of the league’s stars have already chosen to refrain from playing in the tournament in order to prevent injury and not gas themselves out for the upcoming NBA season, the new core of the Celtics is choosing to flout that sentiment entirely. Gone are the days where megastars like LeBron James, Steph Curry, Kyrie Irving, Anthony Davis, and James Harden lead the way for our nation’s squad; instead, the roster now seems to be structured more so with slightly less talented “stars” who will need to learn how to play together and execute true team basketball in order to be successful. Oh how quickly things can change…

This type of environment is one which could help anyone become a more complete and well-rounded player. But there are perhaps very few others in the league who need a crash course on just how to play in this type of atmosphere more than those who were on the Boston Celtics last season.

Look, I don’t think we need to rehash the many examples of why the 2018-19 Boston Celtics were a piss-poor excuse for a professional sports team. I think it’s in the book. However, I will say that very few times in my Boston sports fandom have I disliked one of my own as much as I did that “team,” and fortunately the franchise did take some steps in the right direction to help right the ship this offseason – most notably by jettisoning selfish brats like Kyrie Irving and Terry Rozier and then, in turn, replacing them both with an absolute class act like Kemba Walker. Above all, I also like how Danny Ainge decided not to give up, or give away, the still incredibly promising young assets on the roster, including Smart, Brown, and Tatum. 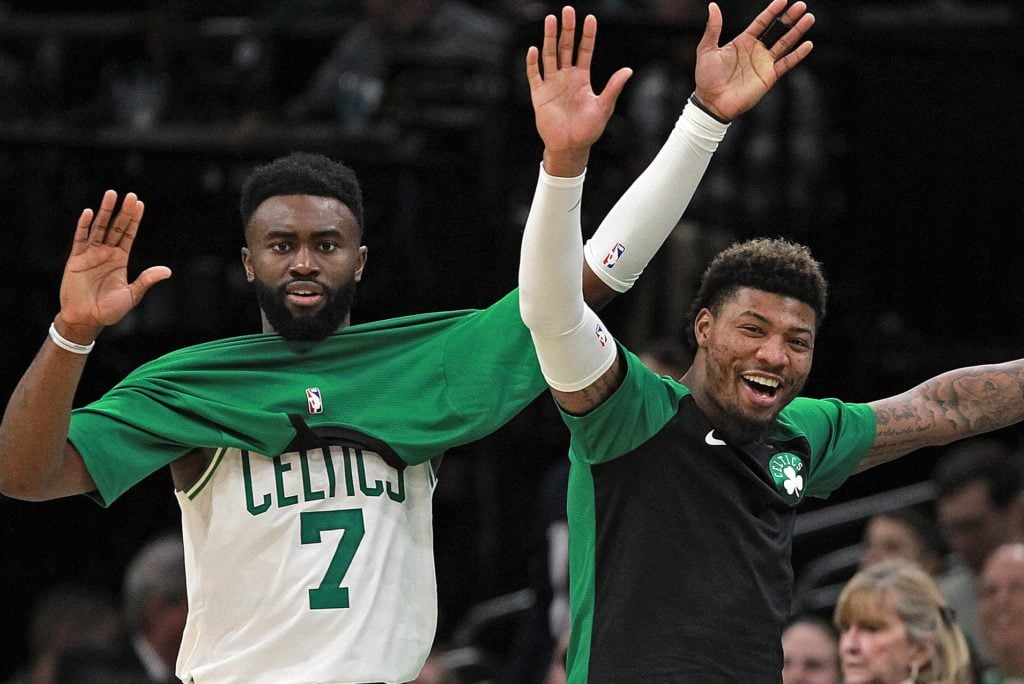 See. There were still some smiling moments on the team last year.

While all four still need to officially make the roster, it seems pretty much like a foregone conclusion. Even if that’s not the case, they all seem inflated by the experience so far, and each of them should at least get something positive out of their time in the desert. Speaking to reporters on Monday, Kemba had this to say about his current Team USA mates and the opportunity being presented to them this year (h/t ESPN.com):

“This is like a once-in-a-lifetime opportunity for a lot of us. I think a lot of us are happy those guys pulled out because this is our chance. It’s our chance to get on the big stage and showcase our talent. A chance for us to do something new. It’ll be a new-look team. Everybody is kind of doubting us, but I think we’re hungry.”

Of course, he is talking about Team USA as a whole, not specifically he and his Celtics brethren. But still, that attitude is one that will hopefully translate from the court in the Far East all the way across the world to the locker room and inner depths of the TD Garden next season.

Seriously, though, look at how happy the four of them look together:

Not one of those smiles look forced (although Jaylen’s is admittedly a bit suspect). That’s some genuine, Grade-A, non-pasteurized cheesing going on right there. What a crew!

OK. Fine. Valid point. But after a season in which we were bombarded with negativity and depressing results, I’m choosing to be hopeful from what I’ve seen so far. And above all, Kemba seems like he could truly be this team’s saving grace – a real deus ex machina for a franchise which looked headed for a major setback at the beginning of the summer – because of the way he carries himself and his willingness to do anything to win. Here’s what Smart said about his new teammate after the four went out to dinner earlier in the week:

Marcus Smart said he and his three Celtics teammates all went to dinner together last night in Vegas. What has he learned about Kemba? “He talks more than I thought. And that’s a good thing.” Said time here is important to Celtics chemistry.

You see, my wishful thinking is not just based on pure speculation, folks.

So, again, while we have quite a ways to go before the regular season, and while summer basketball has diddly squat to do with what will happen in the months ahead, I’m going to try and continue looking on the bright side. Either way, it’ll be fun to see the future of the franchise showcase themselves on the world stage and prove to everyone that this team still has the talent to be a force in 2019-20. For the first time in months, I have hope for the future of my basketball team. I’ll take that as nothing but a win.

(THURSDAY MORNING UPDATE: Welp. Now Smart is now apparently going to be out “indefinitely” with left calf tightness, and nobody is sure when he’ll get back out on the court. But the point remains the same. The camaraderie already built up over the past week or so has been vital, and hopefully Smart heals up in short order.)