Our Inside source confirms with that the Patriots will be wearing their 90s royal blue jerseys vs the Cowboys on November 24th. First time they will wear those jerseys in 20 years. pic.twitter.com/lxxzlSmQ7Y

YESSS. I’ve been campaigning for the Patriots to break out these bad boys for yearsss. The red throwbacks and these beauties are the only thing I will wear when playing Madden. They’re just so awesomely bad and a perfect time capsule of the 90s with the garish two-toned blue and the oversized logos on the sleeves. Now granted this is still just a rumor that seems to have taken on a life of its own after a non-blue check marked account tweeted it out. So lets all take it with a gigantic grain of salt, but theres also this.

FWIW, the Cowboys are already confirmed to be wearing their color rush uniforms for this game, which are based on Dallas’ 90s alternate jersey #Patriots https://t.co/pdWEVEqMCd

Now the real question is when the Patriots do take these jerseys off of mothballs, do I wear the Drew Bledsoe or Ben Coates? Decisions, decisions.

Update: It’s not happening. Kids, you tried your best and you failed miserably. The lesson is never try. 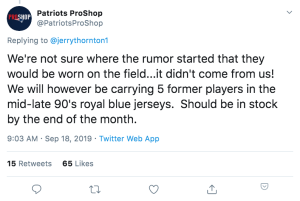 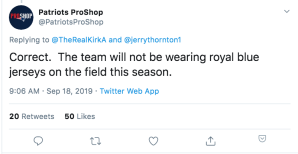