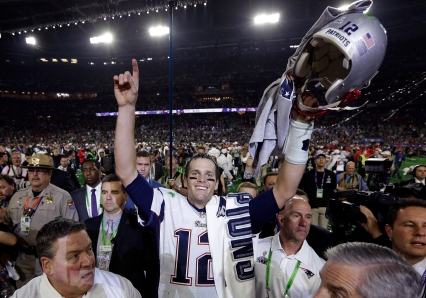 NFL.com – The Patriots are intent on keeping Brady, obviously, believing he has one or two good years left. They are willing, sources say, to pay him in excess of $30 million per year to keep him in New England — a significant commitment that would bring his salary more in line with other elite QBs.

That would help, but it may not be all. If Brady is going to return, he wants to see the team spend on some weapons…Another potential factor for Brady is his TB12 workout facility. Brady wants to continue the routine that has kept him upright and agile throughout the years, and a new team being willing to incorporate TB12 into their footprint would help. The Chargers — who will share a stadium with the Rams — would have that capability.

The Patriots wanting to keep Tom Brady is not Earth shattering news, but Ian Rapoport reporting they’re willing to pay “in excess of $30 Million a year” to keep him certainly is. As more rumored landing spots continue to pop up, I started to mentally prepare myself for Brady getting an offer of 3 years for $90M from another team only for the Pats to counter with 1 year for $25M and that being the end of it. I just cannot see Belichick and the Patriots being reluctant to pay Brady top of the market money for years, only to relent now as he heads into his age 43 season.

Since 2007 when Brady won his first MVP award, he has been paid anywhere from $8 Million – $23 Million per year while only topping $20M once, which came last year. Meanwhile, here are the guys who made more than Brady in AAV last year alone:

This is kind of murky because Brady’s actual salary last year was just $1.75M while he had a signing bonus of $20,250,000 and a roster bonus of $1M, but you get the point. The man is dramatically underpaid. While Brady has always been willing to take less than market value, which fans loved him for, he seems to be looking to make up for some of those lost wages and it’s hard to fault him.

I’m no capologist so I have little idea what paying Brady $30M x 3 would do to the Pats cap, but I don’t think this team is anywhere close to being ready for the post-Brady era. Jarret Stidham may be the guy, but he’s only got one year under his belt and the last time we saw him he was throwing a pick 6 to blow the cover against the Jets.

Are the #Patriots really going to have to start QB Jarrett Stidham in 2020?!?! Jamal Adams smelling blood in the water 💀 #Jets #TakeFlight #NFL @Prez pic.twitter.com/EOSdJxQg6Z

Paying Brady $30M a year at this point is the definition of paying for past performance, which is not a position you ever want to be in. The reality is it’s a spot the Patriots put themselves in by not offering him a real extension at any point in the last two years. 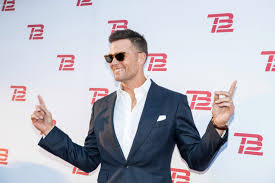 The most interesting part of Rap Sheet’s report though is the nugget about TB12. Obviously this is Brady’s post-career business and passion project; it’s something he truly believes in and credits for saving his career after blowing out his knee in 2008. So what would be better for a franchise that wants to go national than planting another flagship location in Los Angeles?? That truly concerns me because sure Brady could wait until he retires and then open an LA location, but TB12 is a much easier sell when it’s a 43-year-old playing in the NFL than when it’s a 45-year-old “former” athlete pitching it. If the money is equal then I think it would be hard for Brady to turn his back on all of New England, but if a team like LA blows him away with an offer then I think the TB12 piece is the tipping point for him leaving.

I am not ready for Tom Brady to leave us and this pic of him from the NFL 100 last night has me getting a little dusty.

The grey beard just reminds me just how long Tommy boy’s been in our lives and how close we are to the end. This is why I admittedly could never be a GM because I’m ready to pay the man and take one more run at it. So enjoy the next 6 weeks of wild speculation until free agency starts!