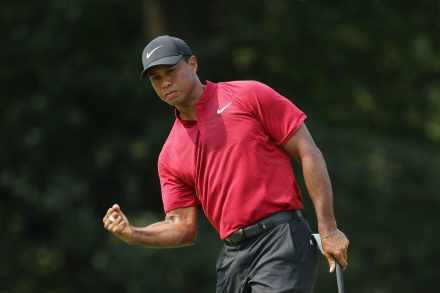 With a huge run in the final round of the PGA Championship yesterday, Tiger Woods finished at -14, which was good for second place, two strokes behind the champ, Brooks Koepka. I keep finding myself saying, if only Tiger could have straightened out his driver he would have won the 100th PGA Championship yesterday. But thats really not the case. Sure he was putting himself in shitty positions all day, hitting exactly zero fairways on the front 9, but he also was hitting absolute circus shots all day to keep nailing birdie after birdie.

In fact the only thing he could have done differently was have a couple putts that rimmed out, fall his way. If those two drop then Tiger at the very worst forces a playoff with Koepka.

But, don’t try and tell Tiger that.

He had massive struggles from the tee all day and mental errors that the old Tiger never had. Old Tiger was ice. He was a robot.

This ain’t old Tiger. This is new Tiger.

An aging veteran, a golfer dealing with massive back injuries fending off young guys that grew up idolizing him. But thats what makes Tiger so much fun to watch these days. He’s human. There’s nothing I love more than a good comeback story.

So yea, I am rooting for him to put it all together. I think a lot of people are too. Watching the PGA Championship yesterday is probably the loudest I’ve ever heard a golf course. The place was electric and going wild like Happy Gilmore was strolling the greens.

So, despite failing to win another major, Tiger looked like a force at times and you can tell he’s still working out some kinks in his game. Its only a matter of time until he puts it all together and snatches another major. And it’s probably going to happen sooner rather than later.

So, I think its only appropriate here to quote the American classic John Wick:

P.S. – Hey Google, get your shit together. You know goddamn well I’m not looking for pictures of jungle cats.