The 300s Previews the Patriots (Part 4): Who the Hell is Playing Linebacker? 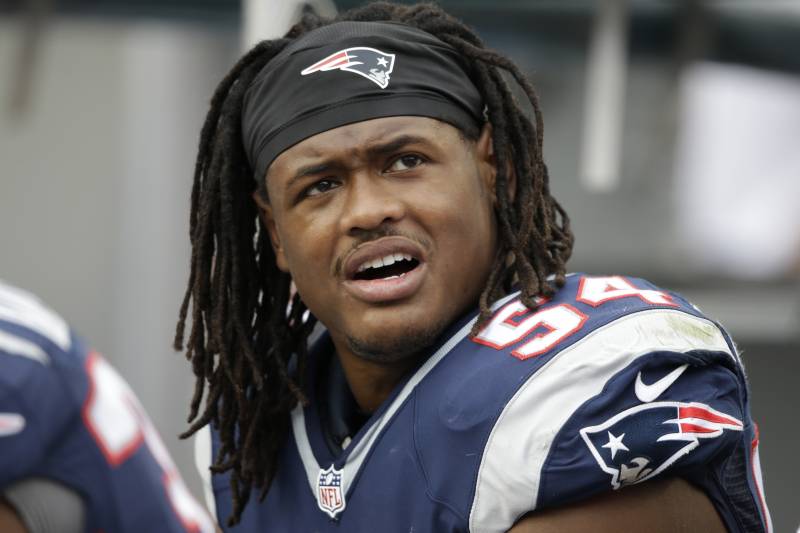 Quick: name the Patriots linebackers this season besides Dont’a Hightower.

For all the attention the team’s depleted receiving corps has received so far this summer, the current group of linebackers lacks some serious name recognition as well.

Everyone knows what to expect from Dont’a Hightower, the team’s unquestioned leader at the position. It’d be nice if he could stay healthy for once, after missing all but five games last season and not playing a full 16-game slate since his second year in 2013. But when he’s on the field, the guy’s pretty damn good.

And sure, Elandon Roberts and Kyle Van Noy started 14 and 12 games, respectively, for the Pats last year, and they’re likely to be the top two playing alongside Hightower in 2018. But I’d be willing to bet that seven out of 10 fans you’d find on the street couldn’t name them both with a gun to their head.

That doesn’t mean these guys are necessarily anything to sneeze at; Roberts and Van Noy each had 65-plus tackles last year, and Van Noy added 5.5 sacks to boot. Both also received above-average ratings from Pro Football Focus last season. Still, neither player is necessarily going to win you any games, and there’s definitely room for improvement.

Marquis Flowers also came out of nowhere and played all right after the team’s Week 9 bye last season, finishing with 27 total tackles and 3.5 sacks over that time – albeit with 10 of those tackles and 2.5 of those sacks coming in one game against Buffalo in Week 16. He’ll most likely serve as the team’s top reserve.

No matter how you feel about them, though, it seems the team didn’t view linebacker as a big area of need this offseason. They did draft two this past May (Ja’Whaun Bentley and Christian Sam), but other than that there was not one notable move at the position.

The Pats also signed former Falcon Adrian Clayborn. And last year’s second-round pick Derek Rivers – who missed his entire rookie season due to injury – is back as well. Both are expected to help the defense this year, but both are also much more of a defensive end than they are a stand-up linebacker. (Some, though, believe Rivers could eventually become a solid outside linebacker due to his great pass-rushing ability – a la Chandler Jones – so we’ll see what happens there.)

It should also be noted that the Patriots finished with the fifth-best mark in the league in terms of points per game allowed last season (18.5), so it’s not like the defense is in bad shape overall. But the team was 20th when it came to rushing yards allowed per game (114.8), and while that has just as much to do with the defensive line it’s still not a very positive note for the rest of the front seven.

Coverage is another area the team’s linebackers struggled with last season, particularly when it came to opposing running backs. They allowed a whopping 844 receiving yards out of the backfield in 2017, which was the second-most in the league behind Tennessee. The defense also (surprisingly) allowed the third-most passing yards overall in the league last year, which indeed has more to do with the secondary, but the linebackers play a big part in that as well.

And this happened just last week in the team’s first preseason game against Washington:

Here’s the Byron Marshall TD. Gets matched up in man vs a Pats LB, should win, does win and then runs away from him. #Redskins pic.twitter.com/dj2FGNVjCw

(Nahhhht a great look there for Van Noy.)

On the plus side, Bentley, the team’s 2018 fifth-round draft choice out of Purdue, has looked great so far, both in camp and during last week’s preseason opener, and he’s even been receiving reps with the starters at practice. 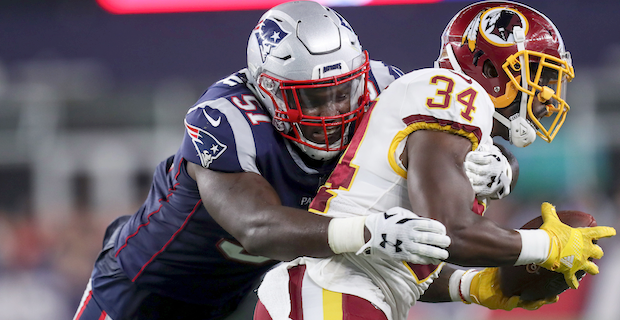 Still, the 6’2″, 255-pound rookie is viewed as much more of thumper who can help against the run, which does not do much at all in terms of helping the team’s pass coverage.

Fortunately, the team often employs a three-safety, two-linebacker scheme, limiting the amount of responsibility the linebackers have in coverage. The team’s solid group of corners as well as safeties Devin McCourty and Duron Harmon (Patrick Chung is more of a run-stopper) can oftentimes pick up the slack and hide the team’s deficiencies in the middle of the defense. This is also perhaps why Bill & Co. chose to focus on other more pressing areas of need this offseason.

The Pats also have guys like Nicholas Grigsby and Brandon King, who are expected to be solid special teams guys. And we can’t forget about second-year man Harvey Langi, who flashed at times early on last season before a serious car accident in October ended his season. Fortunately, it didn’t end his life or his career, and while he is still going to need to win his spot on the team this summer, don’t be surprised if he’s a factor by season’s end. I like what I saw from the kid in his limited action last year.

So again, I am not saying the the linebackers are “bad”; I’m just saying that other than receiver, and maybe cornerback, this is probably the area that’s going to see the most ups and downs in 2018.

Gone are the days that guys like Bruschi, McGinest, Vrabel, and Mayo are seen roaming the middle of the defense, striking fear into the hearts of opposing offenses. But can the guys we have this year still get it done? Let’s hope so. For now, I’ll keep the faith.

Check out the rest of “The 300s Previews the Patriots” series here. And be sure to check out the Pats in action tonight against the Eagles in preseason game No. 2.