“Are you going to step up or not?” Watch the #SpiderManFarFromHome teaser trailer now! 7.5.19 🕷️ pic.twitter.com/z0M8zqCJPI

Okay first things first, this movie looks incredible, but it is such a bummer because it takes all of the suspense out of Avengers: Endgame. We all know what’s going to happen, but at least let us pretend to think differently. Having the actors for Black Panther, Spider-Man and others already signed on to do multiple sequels and then dropping the trailers for those movies while they’re still technically dead is a lame duck move. Kinda takes the venom (see what I did there?) out of this scene too.

But aside from all that, this movie looks awesome and Jake Gyllenhaal as Mysterio?

Our first official look at Jake Gyllenhaal as Mysterio in #SpiderManFarFromeHome pic.twitter.com/jZKpuwyqfF

Can Marvel do what Sony failed to do over and over again? Build a universe around the Sinister Six? I don’t know, but this is a hell of a start from the small sample size we’ve seen.

We also get some always welcomed Nick Fury in this movie, which I was not expecting. 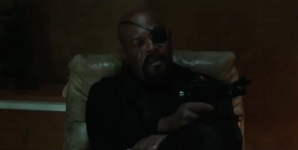 Clearly this movie is going to have a much larger impact on the MCU as a whole, which makes sense since some key Avengers are definitely going to die in Endgame. We might be looking at Spidey taking on the mantle as one of the leaders of the Avengers moving forward and Nick Fury will help launch us into that next Phase of movies.

This spring and summer is going to be an adrenaline shot to the chest if you’re a fan of the MUC with Captain Marvel coming out on March 8th, then Avengers: Endgame on April 26th, and then followed up shortly thereafter with Spider-Man: Far From Home on July 5th. Buckle up.