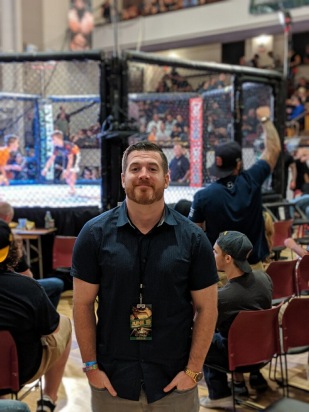 Welllll fuck me. Saturday night was everything you’d expect out of the best of the best in New England MMA and then some. We had amateur and professional bouts, from debuts to vets looking to inch their way closer to the big time. In addition to Peter Barrett and Joe Giannetti, who we spoke to earlier this week, “Shameless” Don Shainis and Brandon Fleming, among other, graced the cage to do battle. Here are some notes:

-Those were some HIGH-LEVEL ammy bouts we got to see along with some awesome backstories. The first victor Red and I got to see was actually competing in his first and only MMA fight before leaving to join the Marines. Semper Fi.

-Jake Bagley, fighting out of Nostos MMA (home of Devin Powell) came to do work and knocked his opponent the fuck out. It was revealed after the fight that just one year ago, Bagley was in rehab. Now he’s a guy who looks like he has a legit future in MMA. O and Red got this little quip from him:

Line of the night from Jake Bagley after his W at @CageTitans tonight:

“Nobody hits like I do. I wake up and work 40 hours building houses every week. I kind of felt like he was on vacation and I’m going to work.” pic.twitter.com/62XHNGJ9Ph

-Kristina Katsikis had her pro debut fighting out of South Shore Sportfighting. Although she lost, she really came back after a lopsided first round against Whittany Pyles. One thing that really stood out was that she had ZERO quit against a bigger, stronger opponent. Lots more to see from “the Meat Grinder”.

-Friend Of The Blog “Slippery” Pete Barrett did NOT disappoint. Remember when he told me he’d either knock his opponent out or send him crawling out of the cage due to lead leg damage? Well he kind of attempted to do both. In the end, Barrett was too much coming out of breaks for Zack DiSabatino and won via RD1 TKO after a nasty knee and a few head kicks. HUGE THANKS to Steve Demenico from Domenico101MMA and the #ambassadortofighters for the below video where you can hear your boy asking Pete about his victory. Find Steve on IG and Twitter at @ambassador_to_fighters .

-Tough loss for Joe Joe Giannetti but these things happen sometimes. He already has retracted his statement on taking a break and now wants to fight a couple times this summer. #comebackseason proceeds as scheduled for Skelator.

Red has a bigger breakdown with a ton of media coming up later today but there’s just a taste. A LOT more MMA content coming from yours truly and The 300s.